Civil Society Participation in the Sustainable Energy for All Initiative

Civil Society Participation in the Sustainable Energy for All Initiative 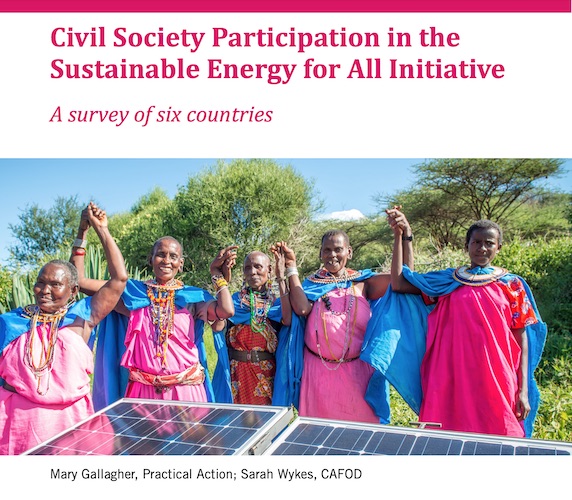 The United Nations Sustainable Energy for All (SE4ALL) initiative has set ambitious goals of, by 2030: achieving universal energy access; doubling the annual rate of energy efficiency; and doubling the share of renewables in the global energy mix. With 1.2 billion people still living without access to modern energy services and 2.8 billion without access to clean cooking methods, action to support these goals is needed urgently. From its inception in 2012, the SE4ALL initiative envisioned a multi-stakeholder approach as being critical to its success, with government, the private sector, and civil society as its three ‘pillars’.

Meaningful participation by civil society organizations (CSOs) and community-based organizations (CBOs) in SE4ALL is widely recognized as being essential to the process; they can act as trusted intermediaries between government, the private sector, and energy users on the ground, as well as having expertise in designing and delivering energy services, particularly for poor and vulnerable groups.

However, SE4ALL has been criticized for offering little systematic institutional support for an inclusive multi-stakeholder process through its implementing agencies – such as the United Nations Development Programme (UNDP), the multilateral development banks (MDBs), and national development agencies.

Although the results were varied, the clear general trend was that the majority of respondents felt that they had not been adequately included, or were unable to engage meaningfully, in the SE4ALL initiative. Some areas of questioning resulted in particularly low scores – for example, responses to indicators relating to ‘gender awareness and proactive outreach to vulnerable and excluded groups’ as well as ‘participation in implementation and monitoring’.

Overall, the survey findings show that without increased and ongoing support for meaningful civil society participation in SE4ALL, the initiative will have limited impact – particularly in terms of reaching the goal of universal energy access.