Bringing solar out of the shadows

Bringing solar out of the shadows

For Tanzania to meet its energy needs – and in a way that is sustainable – huge levels of finance are required to boost its decentralised energy sector. But the latest research shows current funding flows are way off target. 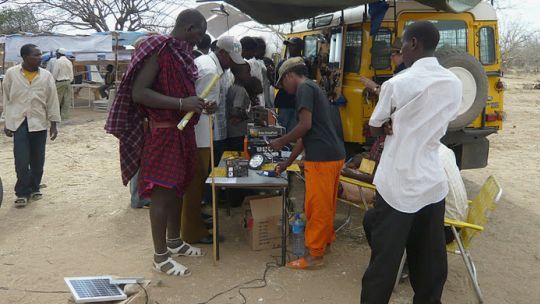 A demonstration of solar PV products by the Energy and Environment Partnership in Tanzania’s southern Iringa Region gathers an audience of all ages (Photo: EEP Southern and Eastern Africa, Creative Commons via Flickr)

Providing sustainable energy for everyone, in line with the Sustainable Development Goals (SDGs), will need a massive shift to decentralised supply through such technology as solar home systems or clean cook stoves.

Getting energy to remote areas using decentralised solutions is often quicker and cheaper than expanding the central grid.

But to make this possible, public finance – money needed to grow nascent markets – needs to be able to reach this sector. Global climate finance continues to favour ‘big grid’ technologies. An earlier IIED-Hivos report found this bias was certainly true for global climate finance  – but what about within countries?

IIED has been working with consultants in Tanzania to find out. In a big country such as Tanzania, where in 2012 just 20 per cent of people had access to the grid, decentralised energy is crucial if the government is to achieve its target of 75 per cent electrification by 2033.

Our new research, ‘Money is power‘, found that investments in the grid by the Tanzanian government and several development partners far outstrip financing for decentralised technologies.

The sector’s biggest supporters are the European Union, UK (the Department for International Development (DfID)) and France (AfD), while countries such as Japan and Korea focus exclusively on the grid.

Click on this diagram to see a larger version.

It is a huge split. But what really matters is how commitments meet people’s needs on the ground. The World Bank and International Energy Agency (IEA) (PDF) estimate that delivering energy access for all Tanzania’s citizens would cost between $65 million and $2.1 billion each year depending on the level of service provided.

Based on a five-tier framework, getting everyone to ‘tier 2’ – basic power supply for lighting the home and charging mobile phones – would cost $425 million each year. Under the World Bank/IEA model, decentralised systems such as a 100 watt solar panel, would meet these needs.

But as we found, funding commitments fall far short. Taking average annual spending, development partners provide six per cent of the $425 million, while the government’s contribution accounts for just one per cent.

It’s hard to capture all funding flows – we need to sharpen methodologies and fill data gaps. But this quick exercise tells us there’s a problem to address.

Click on this diagram to see a larger version.

Who is left behind?

The research also looks at who’s benefitting from the development partner funding for decentralised energy – and who’s not.

Generally, foreign-owned small and medium-sized businesses and NGOs get a bigger slice of the pie than domestic players, although some Tanzanian organisations, such as solar company Ensol and NGO TaTEDO, have attracted significant finance.

The funding being so heavily skewed towards foreign players is disappointing though not surprising: foreign entities know how donors work, and can access other funds to build their models and put together convincing business plans.

Of the solar providers that are receiving funding, we found that there were big geographic divides. Off-grid solar is concentrated in just a few regions in eastern and northern Tanzania, such as in Dar es Salaam, Mwanza and Arusha, while areas in the west and south are poorly served.

Furthermore, the poorest people are missing out on good quality solar home systems as they are not affordable. People in Kigoma and Geita regions, for example, with less than $17 a month to spend on all their basic needs, are living below the poverty line. But a basic system comprising a 12 watts panel, three lanterns, a radio and a charger, would cost 40 per cent of their monthly spending for three years.

This is not to judge solar providers – they cannot sell products for less than it costs to distribute them. But it does suggest that more ambition, innovation and collaboration are needed to achieve the SDGs’ commitment to leave no one behind.

Tanzania has taken steps to encourage decentralised energy, including introducing rules, grants and advice to support mini-grid developers. But the industry says extra incentives, and a level playing field with the centralised grid, are key to getting more money flowing to this vital sector.

The government, development partners and local financial institutions need to take a number of steps to make this possible. This includes protecting off-grid providers from being undercut when a subsidised grid service arrives in their area, providing local banks and other lenders with low-interest loans and other incentives to start financing decentralised energy, and investing in technologies that matter to the poorest, especially clean cooking fuels. Supporting innovations to make services more affordable is also critical.

Is there light ahead?

Some of these reforms might just happen. Currently, Tanzania’s draft action plan on Sustainable Energy for All is under consultation and echoes many of these promising ideas. Plus the renewable sector got a boost at last year’s UNFCCC climate change conference in Marrakech when Tanzania joined other members of the Climate Vulnerable Forum to support a shift to 100 per cent domestic renewable production.

The challenge is to match political statements and policy initiatives with hard cash. But as we found, there’s still a long way to go.